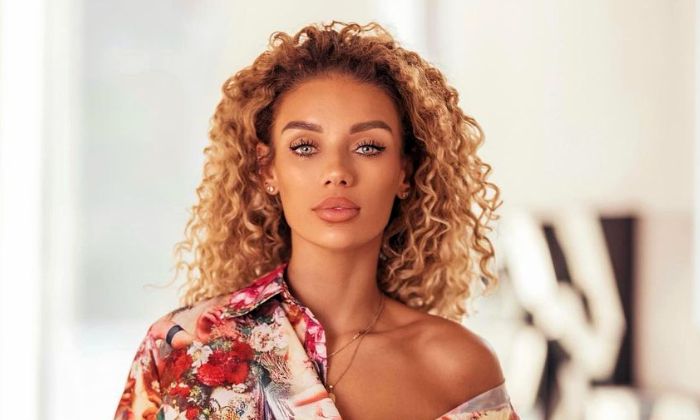 Jena Frumes is an Instagram model and social media sensation from New Jersey who gained a lot of fame for posting racy pictures of herself on her Instagram account where she has amassed over 4.2 million followers. Off lately, she made lots of headlines when she started dating Manchester United ace footballer Jesse Lingard. Although it was a short-lived relationship, she’s attracted tons of fans from all over the world. Jena has an incredibly slim, yet curvaceous, body with perfect measurements that she’s never afraid to show off to the world.

Jena was born and raised in New Jersey where she spent most parts of her early life along with her younger sister. Other than that, she hasn’t revealed anything about her family or her siblings.

She wanted to be an actress from an early age. After graduating from high school, she expressed her desire to pursue acting to her parents but they were against her wish. They finally gave in but insisted she complete a degree just in case if things go south.

Her passion for acting would lead her to enroll at the North Carolina University in Durham, North Carolina where she studied theatre and dance. She then moved to Loa Angeles to pursue her dreams.

When it comes to her love life, Jena Frumes has her fair share of men. Jena’s first-ever publicly known relationship was with actor Nick Cannon, whom she dated for over a year from 2016 to 2017.

She then briefly dated Footballer Antonio Brown in 2017 before starting her relationship with Manchester United player Jesse Lingard. The couple was together for a little over a year before they split in mid-2018. The breakup came after Jena found that Jesse cheated on her.

Jena’s most recent romantic partner is singer and rapper Jason Derulo. They have been together since March 2020 and were often seen together in his TikTok videos. She gave birth to her first child, a son, in 2020.

Though Instagram hottie Jena Frumes has been in the online game for a long, her career saw an unprecedented growth only in the year 2015 when she appeared on Mariah Carey’s ex-husband Nick Cannon’s popular show Wild N’ Out.

Thereafter, there is no turning back for this sizzling model, and made her acting debut in The House Next Door in 2018. She has featured in several music videos, including the likes of Ah Yeah by Jacob Latimore, Light It Up by Marshmello (ft. Tyga And Chris Brown), and I Think of You by Jeremih (ft. Chris Brown and Big Sean).

According to sources, Jena Frumes has a net worth of around $500 thousand dollars, which she managed to accrue through a successful career as a model and social media star.

Like many social media personalities, Jena Frumes has tons of followers across social media platforms. She’s very active on Instagram, which is the obvious place to check out her flawless beauty, where she’s got over 4.8 million followers. She has nearly 100 thousand subscribers on her self-titled YouTube channel. On Twitter, she has over 180 thousand followers.

She was the attendee at the baby shower show of ‘Wild N’ Out’ girl star, Brittany Dailey in 2015.

In 2019, she was cast as Kimberly in an episode of the comedy television series King Bachelor’s Pad.

In 2020, she played Kisha in the sports comedy-drama film She Ball.