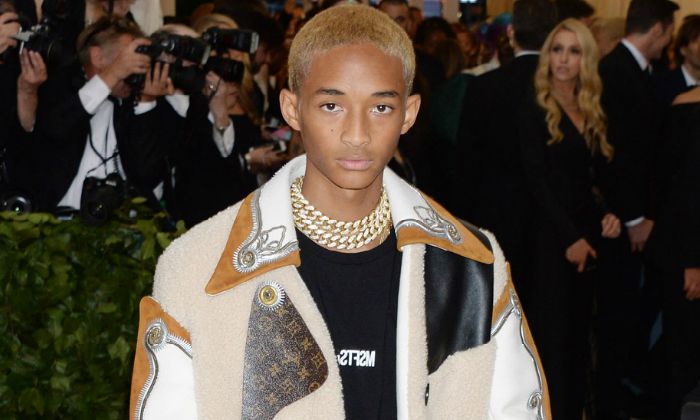 Jaden Smith is an American actor, singer, rapper, and songwriter. He needs no introduction since he is the son of the Hollywood couple Jada Pinkett Smith and Will Smith. The multi-talented lad appeared along with his dad in a couple of movies like The Pursuit of Happyness, for which he won the Teen Choice Award for Choice Movie Chemistry.

He attained stardom on his own by starring in movies like The Day the Earth Stood Still, The Karate Kid and After Earth. Also a singer and rapper, he released his first studio album entitled Syre in 2017. That same year, he returned to acting and played Dizzee in two-part Netflix series, The Get Down. As of 2023, Jaden Smith has a net worth of $8 million.

Jaden Smith was born on the 8th of July 1998, in Malibu, California, United States. He is currently 24 years old.

Be careful with how you make the world perceive you, because they’ll perceive you like that for the rest of your life.

Jaden is the oldest son of actors and musicians Will Smith and Jada Pinkett Smith. He has a younger sister, Willow Smith, who is an actress and singer, and his half-brother, Trey Smith is also an actor and disc jockey. His maternal grandmother’s family was of Afro-Creole-Caribbean descent while his other grandparents are African-American. Actor and writer Caleeb Pinkett is his uncle.

Talking about his education, he was homeschooled and later attended New Village Leadership Academy, a private elementary school in Calabasas, California, which was co-founded by his parents.

It doesn’t matter who his parents are, Jaden has a great sense of fashion, which is often described as a weird sense of fashion by tabloids. Owing to his good looks and height, he was named the fashion icon face of Louis Vuitton in 2016.

He easily gets a lot of attention from fans, especially girls. It’s no surprise that he has dated many women, including reality television personality and model Kylie Jenner, whom he dated from 2013 to 2015.

Actually, Jaden’s first relationship was with actress Madison Pettis, when he was just 8 years old. They remained friends for years until they started dating in 2006, an ON and OFF kind of relationship, and they finally ended it in 2011.

In 2011, he was seen going out with Stella Hudgens, the younger sister of actress Vanessa Hudgens. She is three years his senior. They dated from July 2011 to August 2012.

Jaden and Sofia Richie had a short-lived relationship in 2013 before he got hooked up with Kylie Jenner. In 2015, he was romantically linked up with model Sarah Snyder, however, this relationship also didn’t last than a year, and ended in September 2016.

In 2018, he had a short-lived relationship with rapper Tyler, the Creator, and then briefly dated English model, actor, and singer Cara Delevingne.

Since 2017, Jaden has been in a relationship with actress Odessa Adlon.

My dad once told me, he was like, ‘The only time you should lie is when someone’s holding a gun to your head and says ‘Okay, lie or I’m going to shoot you.’ And that really stuck with me

Jaden made his acting debut with the 2002 science fiction action comedy spy film, Men In Black II. He played a cameo alongside his dad, Will Smith.

His first major acting role as an actor came in 2006 when he was cast in the biographical drama film, The Pursuit of Happyness. He played the role of Christopher Gardner Jr., the son of Chris Gardner, a role that was played by Will Smith. He won the Teen Choice Award for Choice Movie Chemistry and MTV Movie Award for Breakthrough Performance

Jaden’s first acting job was in the now-defunct UPN network sitcom, All of Us in 2003, in which he played the character named Reggie. He appeared in a total of six episodes between 2003 and 2004.

Smith dropped his first mixtape titled “The Cool Cafe: Cool Tape Vol. 1”, on October 1, 2012. On November 18 of the year 214, he released his second mixtape, CTV2, a sequel to his first mixtape.

released his debut studio album called “Syre” on the 17th of November 2017. The single “Icon” was released on the same day, which peaked at #3 on the Bubbling Under Hot 100 Singles chart. The album debuted at no. 24 on the US Billboard 200 as well as managed to chart on various music charts in several countries.

Though Jaden has only starred in a handful of movies, he’s already a prominent face in the industry at his age. His appearances in The Karate Kid and The Pursuit of earned him widely positive reviews from the critics and considerably his finest work in his career.

Jaden has been featured in a McDonald’s commercial.

I used to not be really honest with girls and then I dropped a song called ‘Starry Room’ and then I started turning over a new leaf.

As of 2023, the incredibly talented Jaden has accumulated a net worth of over $8 million, thanks to his box-office success movies. As per insiders, he took home a staggering $1 million for his role in the Jackie Chan starring movie, The Karate Kid.

It is speculated that the After Earth actor would pay a whopping $3 million for reprising his role in the movie’s sequel. Apart from acting, his interest lies in music, which adds up a substantial size of money to his net worth. In 2016, he signed a million-dollar deal with Louis Vuitton to be his face which considerably added to his wealth. In 2017, Jaden moved out of his parent’s house into a lavish $4 million Calabasas home located in Hidden Hills, California.

Jaden recorded the theme song “Never Say Never” with Justin Bieber for his movie The Karate Kid in 2010.

He was featured in Alicia Keys’ 2008 music video for “Superwoman.”

He was named as the “Breakthrough Male Star of the Year” by ShoWest in 2010.

Jaden and his siblings were youth ambassadors for Project Zambia which helps children orphaned by AIDS in Africa.

In 2008, he landed the role of Jacob Benson Jr. in the movie The Day The Earth Stood Still, starring alongside Keanu Reeves. He won the Saturn Award for Best Performance by a Young Actor.

Smith launched his own clothing line called MSFTSrep in 2013, which offers a range of hoodies, T-shirts, trousers, and vests. In May of that year, he made ties with a Korean designer called Choi Bum Suk and launched a pop-up store that let customers buy clothes with their collaborated logos.

He has been a partner in the spring water company Just Water since age twelve. It aims to provide a water filtration system in poor countries at a low cost. The company ventured into the UK market in August 2018.

In 2022, Jaden provided his voice to the character named Jordan in the adult animated music television series Entergalactic.