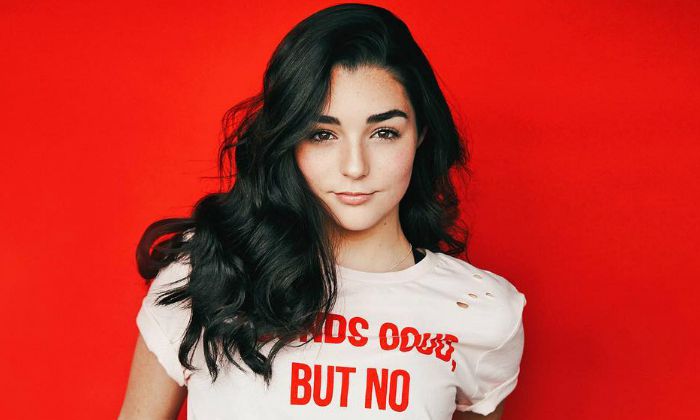 Hailing from Coolbinia, a suburb of Perth in Western Australia, Indiana Massara is an aspiring model, actress, singer, and social media personality. Her path to stardom occurred at just 13 years old when she walked the runway at the Los Angeles Fashion Week. Thereafter, there’s no turning back for this multi-talented pop singer. She released her debut song “Drama” featuring Stoppa, in 2017, which charted in the top ten on Radio Disney.

Indiana has since released a string of tracks including “Smoke In My Eyes”, “Do Yourself A Favour”, “Apology”, “I Think We’re Alone Now”, “Over It” and “Stay It Back” as well as performed opening acts for Why Don’t We, Bryce Vine, and Ava Max at the Kiss the Summer Hello 2019. She plays one of the lead roles in the web series Chicken Girls. That eventually landed her roles in both TV series and films with parts in Brat Chat, Intern-in-Chief, Saturated, Single Parents and Mayfield’s Game. Also a social media star, Indiana has over 1.1 million followers on Instagram and a little less than 300 thousand people have subscribed to her eponymous YouTube Channel.

Indiana Massara was born on the 23rd of August 2002, in Coolbinia, a suburb of Perth, in Australia. She is currently 19 years old.

While not much is known about her family, Indiana grew up alongside her elder brother, Presley Massara, and a sister. Her brother is also an actor with whom she starred together in the American reality series Sh!T Happens.

Indiana attended Mercedes College in the City of Perth until grade seven and moved to Los Angeles, USA, where her brother and her mother were already residing to pursue a career in show business.

Now, this is the topic that most of you are probably looking forward to. There’s not much we have to share regarding the personal affairs of Indiana. She has tried to keep things away from the media to the best of her abilities.

Indiana Massara made quite a splash in the pop world when she dropped her first single, “Drama” featuring Stoppa, in 2017. She was just 14 years old at that time and was quick enough to earn a name in the pop industry.

Indiana landed her first acting role in a short film called Crafty: Or (The Unexpected Virtue of the Girl in Charge of Snacks) in 2015, playing the role of Kendall.

In 2019, she was cast as Paige in Mayfield’s Game, which is set to release anytime soon.

Not long after she made her acting debut in a short film in 2015, she appeared on the American reality series Sh*T Happens that year. She also earned guest spots in TV series like Connect, Saturated and Single Parents.

In 2017, she landed a part in the web series, Chicken Girls, as Rooney Forrester starring along with other social media stars, Annie Leblanc, Hayden Summerall, Hayley LeBlanc, Brooke Butler, Madison Lewis, and many others.

It’s no doubt that Indiana Massara is one of the most promising talents in the industry who has already made her mark in the show business. In addition to singing, she is also a passionate actress known for starring roles in the most popular web series, Chicken Girls and Chicken Girls: The Movie.

In 2018, she joined Brat Chat as host, which is probably a digital media. That same year, she played a cameo in the popular teen drama web series Total Eclipse.

According to several sources, her net worth falls in the bracket of $300 – $500 thousand as of 2022. That being said, most of her earnings come from her career as an actress and singer. Additionally, she also earns a lumpsum amount of money by monetizing her videos on YouTube.

Besides all this, this gorgeous and passionate young lass is also a social media influencer. With over 450 thousand subscribers on her self-titled YouTube channel, Massara uploads videos offering a glimpse of her personal life apart from showing off her singing skills.

Her Instagram account @indiana, which has over 2 million followers, not only keeps up with her latest projects and endorsements but also gets personal. She has over 430 thousand followers on her Twitter account while her Facebook page has a little over 170 thousand followers.

She moved to the United States at a young age to stay along with her parents and older brother.

She is represented by Osbrink Talent Agency.

According to Indian, her early inspirations include Elvis Presley and Frank Sinatra. She also cites Sza, Khalid, Jack & Jack, and Beyonce as her biggest inspirations.

Indiana went on her first-ever tour alongside Tayler Holder, Zach Clayton, and Joey Birlem with Swipe Up Live in Australia in October 2018.