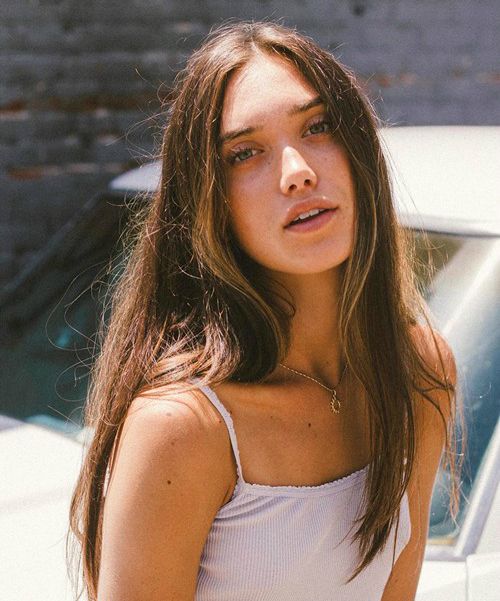 Hannah Meloche is a young talented YouTuber from America who is best known for her beauty and lifestyle videos on her self-titled YouTube channel. She has over 2 million subscribers on her channel. The beauty damsel is equally popular on the photo uploading app Instagram where she has over 1.8 million followers.

Hannah Meloche was born on February 26, 2001, in California, United States of America

Talking about her education, she attends high school.

Hannah Meloche has been dating fellow social media star Jacob Hoexum since October 2017. He often appears in her videos. She confirmed her relationship with him in late 2017 by posting a string of their pictures on Instagram.

Attractive beautiful eyes; Her left eye is Green while her right eye is Blue.

Being a popular social media personality, Hannah earns a handsome amount of money from brand endorsements and YouTube, which is her primary source of income. However, the exact information about her net worth and earnings is unknown.

She joined YouTube in 2013, but her first video was made available in March 2014, which was a DIY on turning crayons into lipstick.

Initially, she used her mother’s smartphone to shoot videos and got her first camera on her 13th birthday.

Hannah always had dreamt of attending Prom since she was a child, which came true in May 2018. She had shared her experience of her first prom on her personal blog.

Likewise, she fulfilled her dream of going to Coachella in 2018. She was very much obsessed with attending Coachella ever since her 7th grade.

Fashion and beauty are something that always turns her on and she makes a lot of makeup, fashion, lifestyle, and DIY videos.

Some of her most popular videos on YouTube are “10 things to do at a sleepover when you’re bored”, “Being A Model for A Day- Meal, Fitness, & Photoshoot”, “Finals Week School Morning Routine 2017”, “Little Mix”, and “Thrift Shopping with Hailey Sani & Hannah Meloche”.