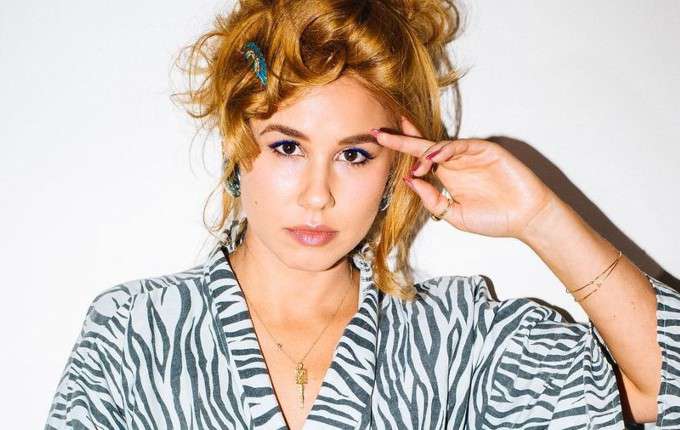 Haley Elizabeth Reinhart is a famous American pop singer, songwriter, and voice actress. Haley rose to fame through her performances in the country’s biggest talent show, American idol. Born to a family of musicians, she has become a music prodigy since her childhood and played guitar at home with her mother at the age of 8. She is best known for her cover of Elvis Presley’s ‘Can’t Help Falling in Love’ that made its way up to the Billboard music chart and earned platinum certification.

After her successful stint on the American Idol, she signed a deal with Interscope Records and issued her debut album titled “Listen Up!” in May 2012. Later she signed a contract with music publisher Ole and ICM Partners. She is the very first American Idol contestant to have performed at the Lollapalooza music festival. She was a featured artist for Jeff Goldblum’s debut album The Capitol Studios Sessions. Her major albums are Better (2016), What’s that sound? (2017), Lo-fi Soul (2019).

Haley’s parents Patti Miller-Reinhart and Harry Reinhart are both musicians. They owned a band named Midnight and she used to perform with the band during her childhood years. Her younger sister Angela Reinhart is also a singer-songwriter. Her parents nurtured music notes, took her to concerts, and made her sing in the chorus when she was just three.

Haley attended Mark Twain Elementary school, later educated in O. W Homes Middle School in her home town Illinois. She graduated from Wheeling High School in 2009. Reinhart then joined Harper College a public community college in Palatine, Illinois, where she studied jazz music between 2009 and 2010 and was associated with the Jazz Ensemble and the Jazz Lab.

She was also a part of her school’s vocal group called Midnight Blues. Since middle school, she dreamt and planned on auditioning for American Idol. Eventually, in her middle school, She received an award at the end of the year for student ‘Most Likely to Be on American Idol’. Hailey also led a band during college under the name Haley’s Comet and Reinhart & the Rastatutes. These bands used to cover classic rock songs from Led Zeppelin and famous covers of that time. She served as a lifeguard for four years at the Family Aquatic Center, a waterpark in the Wheeling Park District in her initial years auditioning for American Idols.

Haley Reinhart has been dating singer and musician Drew Dolan for several years now. She keeps elusive about her dating life and prefers to keep that aspect of her life off the spotlight.

Reinhart has been linked to at least two men in the past. She had rumored relationships with Stefano Langone (2011) and Casey Abrams (2011).

Haley first tried and auditioned her luck in the 9th season of ‘American Idol’ and failed. Undaunted with determination, she auditioned again the next season and finished among the top three finalists. She received very harsh comments almost every week and became equally vocal with her ‘sassy’ responses. Fortunately, She also earned a lot of praise from both the judges and the audiences for her melodious lovable voice. Her deterministic attitude, self-esteem, and confidence won her several admirers from the celebrity circle including Tom Hanks.

In her ‘American Idol’ journey, Haley admired the audience and the judges for her extraordinary singing performance. She sang many pleasing covers including ‘Breathless’ by Corinne Bailey Rae, ‘God Bless the Child’, ‘House of the Rising Sun’ during show rounds. In American Idol, Haley was picked as their favorite season ten contestant by Judges, and even Robert Plant and Jimmy Page recommended the producers of the show to offer her the opportunity to sing a Led Zeppelin song for the Top 3 week.

She lives a luxurious lifestyle and travels throughout the world which we can see through her daily personal updates on social media posts and stories. She earns from sponsorship, advertisements, and endorsements. According to CelebrityNetWorth, Haley Reinhart’s net worth sits at $1.5 million USD.

When she was eight years old, Haley started taking music with passion and associated with her parents in their band which covers rock music songs from the 1960s and 1970s.

Haley has been doing philanthropic work since her American Idol days. She participated in VH1’s ‘Do Something Awards’ and then started to work with ‘Habitat for Humanity’ as well as ‘Starkey Hearing Foundation’.

Haley having a close bond with her co-contestant Casey Abrams. She tells him as her special buddy and ‘musical soulmate’.

Haley was arrested after she allegedly punched a ‘Lamplighter Inn’ bouncer in Palatine in 2017.

Her second studio album titled ‘Better’ was released on April 29, 2016. On ‘Billboard’s Independent Albums chart, the album ranked at #22.

In September 2017, she released her third studio album titled ‘What’s That Sound?’ It spawned hit singles ‘Baby It’s You’, ‘The Letter’ and ‘For What It’s Worth’.

Since 2015, Haley has been a part of the adult animated series F Is for Family. She has starred in Hell’s Kitchen, 90210, and We Can Be Heroes.