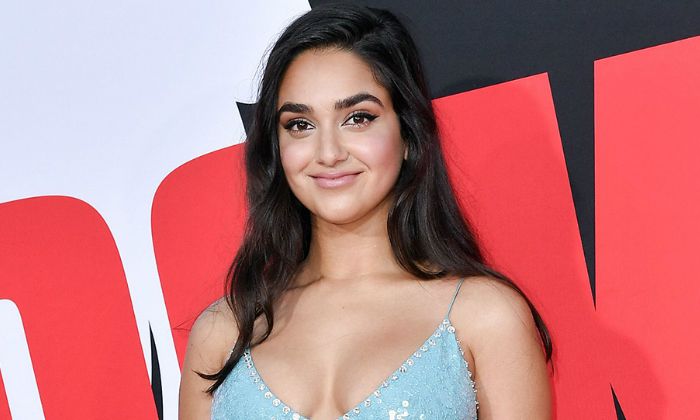 Geraldine Viswanathan is an Australian actress who captured a lot of attention lately for her role as Kayla in the 2018 blockbuster comedy movie Blockers. Having grown up in Newcastle, New South Wales, this Aussie beauty has already achieved huge fame in her home country.

Her acting claim to stardom includes her starring role in Emo the Musical, as well as playing series regular, Eliza, a worker in Heaven, in Miracle Workers. She already owned the year 2019 with major acting credits including the titular role in Apple’s original film Hala, and for her roles as Tawnie in BoJack Horseman and Rachel Kellog in Bad Education.

Geraldine Viswanathan was born on the 20th of June 1995, in Newcastle, New South Wales, Australia. She is currently 26 years old.

Geraldine Viswanathan is the only daughter of Suresh Viswanathan and his wife Anja Raith. Her father is of Malaysian Tamil ancestry while her mother has Swiss origin.

The dazzling beauty became obsessed with performing arts at quite a young age and it was her parents who encouraged her to achieve her dreams. She attended a school of Performing Arts in Broadmeadow, Newcastle to overcome her shyness as well as to hone her acting skills.

From June 2018, Geraldine Viswanathan has been ina relationship with a guy named Miles Guthrie Robbins. They recently celebrated their first-year anniversary and are going strong in their relationship.

Geraldine Viswanathan made her feature film debut in Emo the Musical, in which she played the role of Jamali.

In fact, Geraldine started out as a television actress, landing a role in the television series, Lost Angeles in 2015. She was cast as Sarah in the series, a role that earned her a lot of fame and recognition that led to other significant roles in both the film and television.

People in the industry, including critics, would always credit her role in Kay Cannon’s adult comedy film, Blockers, that brought her to fame. Her portrayal of Kayla Mannes, daughter of one of the lead characters Mitchell (played by John Cena), received high praise from critics with Refinery29 referring to her as “the film’s breakout star.

In 2019, she played one of the leads, Eliza Hunter, in an anthology comedy television series, Miracle Workers, which is based on the novel What in God’s Name by Simon Rich. She starred alongside the likes of actors Daniel Radcliffe and Steve Buscemi.

Geraldine, who is in her early 20s, had already made a name for herself as an actress. She has made a splash in the industry with her incredible works that aided her to earn an impressive net worth for herself.

Just like other stars, Geraldine Viswanathan is very active on social media. with her Instagram page being the most popular social media handles amongst her fans. Fans can follow her on Instagram @yoyogeraldine, where she has over 85,000 followers and the numbers are growing with every passing day. She has over 8,000 followers on her official Twitter page, @yoyogeraldinev, and her Facebook page, @geraldine.viswanathan has attracted over 4,200 followers.

Geraldine Viswanathan fell in with performing arts at a young age and made her acting debut when she was just 20 years old.

She is a competitive horse rider and has been riding a horse since she was 2 years old.

Geraldine is fluent in Swiss German.

In 2019, she’s cast in the titular role in the drama film, Hala, an Apple’s original film. The film is set to have a limited release on November 22, 2019, followed by a digital premiere by AppleTV on December 6, 2019.