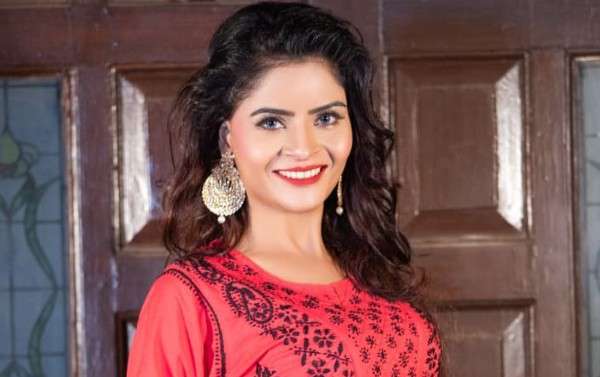 Gehana Vasisth whose real name is Vandana Tiwari is an Indian film and television actress. She burst into the spotlight when she won the Miss Asia Bikini contest of 2012. The actress became even more popular lately when she starred in the adult web series Gandii Baat as Swati.

The actress topped headlines in February 2021 after she was arrested by the Crime Branch of Mumbai Police for shooting pornography videos and uploading the same on her website. Let’s take a look at her personal and professional life.

She hails from a religious brahmin family, the oldest daughter of Rajendra Tiwari and his wife Meena Tiwari. Her father worked as an educational officer. She grew up alongside her three younger siblings: brothers Vedant Tiwari and Sankalp Tiwari and a sister, Namrata Tiwari. Her grandmother is the retired principal of Arera convent school.

Gehana Vasisth is a college graduate and has attended schools in Chirimiri and Bhopal. She graduated with a degree in Computer Science from All Saints College of Technology, Bhopal.

Gehana has already forged a place for herself in the modeling industry. But her gorgeous looks and impressive hourglass figure made her even more popular in the entertainment industry, captivating audiences from all walks of life. She has made her way to the hearts of the Indian audiences with her breezy appearances on both the big and small screens.

On February 6, 2021, Gehana Vasisth was arrested by the Crime Branch of Mumbai Police for shooting pornography videos and uploading the same on her website. She and her accomplices were booked on three counts: rape, outraging the modesty of women, and obscene act under the Indian Penal Code (IPC). A 24-year-old model lodged a complaint against her alleging that she was forced to act in po*n videos.

She has been involved in the scandal for a while now and has uploaded more the 90 such videos to her website that would allow visitors to access the videos on subscription.

Her first major role on a television was in the Star Plus soap opera, Behenein, in which she played the character of Gomti Das, Shyamad’s mother.

Gehana has appeared in more than 70 television commercials.

She won the Miss Asia Bikini contest in 2012.