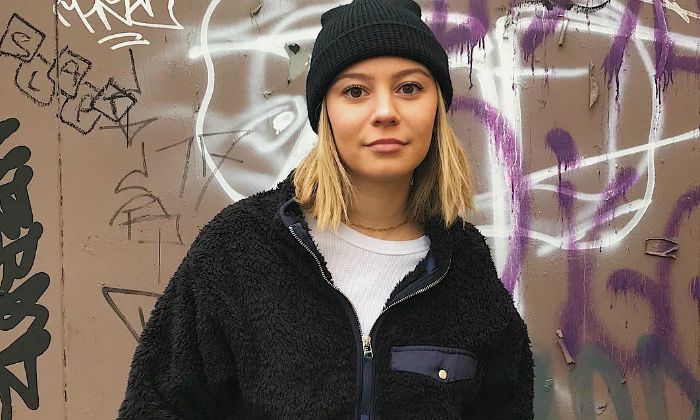 Hannelius is an American actress and singer who gained a lot of fame in her early career with her recurring roles in the Disney Channel series Sonny with a Chance and Good Luck Charlie. She played the character of Avery Jennings in Disney’s Dog with a Blog from 2012 through 2015. She also did voice roles in movies such as Spooky Buddies, Treasure Buddies, Santa Paws 2: The Santa Pups, and Super Buddies.

G Hannelius was born on the 22nd of December 1998, in Boston, Massachusetts, United States. She is currently 23 years old.

Hannelius is the daughter of Paul and Kathy Hannelius. She has a younger sister named Michelle Knight Hannelius.

She graduated from Sierra Canyon High School in May 2017.

G. Hannelius was been in a relationship with Jack Chiate from November 2015 to 2017. Her relationship with Chiate became known to her fans when she shared their pictures on Instagram. They both appeared together on several red carpet events, including the red carpet event of her hit TV show, Dog with a Blog. Jack graduated from Calabasas High School in 2017 and they were spotted together in a prom picture she shared on Instagram, However, things didn’t go well between the two after he enrolled at USC as part of the class of 2021. They broke up in 2018.

In July 2018, she shared a picture of herself with an unknown man tagged as her boyfriend. His name was later found to be Barrett. He graduated from Chatsworth High School in 2017. As time goes on, love between the two had gone strong and they post a lot of their pictures together on their respective Instagram account.

Hannelius digitally released her first single “Staying Up All Night” in 2011. Over the years, she has dropped little less than a dozen songs including “Sun In My Hand”, “Moonlight”, Stay Away”, “4:45” and “Lighthouse”.

Hannelius made her acting debut as Zoe with the 2019 film, Black & Blue.

In 2009, she earned her first acting job with the ABC sitcom, Surviving Suburbia as Courtney Patterson.

Hannelius became a Disney staple after she was hired by them to cast in their original TV series and films. She appeared in several Disney productions, and almost, all of her roles brought her fame and critical acclaim. She found plenty of success with her debut appearance on the television sitcom Surviving Suburbia. Her performance in the series was highly praised by critics with the show sustaining an average of 6.5 ratings and attracting 12 million viewership.

Her other most remarkable performance came with Disney’s most popular comedy series, Dog with a Blog. As usual, she delivered a stellar performance with lots of jaw-dropping moments. The show was a huge hit among the American kids and was nominated in the category “Outstanding Children’s Program” at the Emmy Awards for consecutive three years from 2014 through 2016. It was also nominated for “Favorite TV Show” at the Kid’s Choice Award in 2015 and 2016.

Some of her notable voice roles in television shows include Amanda in Fish Hooks, Lady Joy in Sofia the first, and Little Bits in Wander Over Yonder.

She launched her career officially in 2009 by appearing in the TV commercials like Dairy Queen, Aquarium of the Pacific, and many others. She then transitioned to TV shows and films.

G. Hannelius has garnered around $1 million in net worth.

Her first acting experience came in the form of a role with Children’s Theatre of Maine, in which she played Jenny in Tales of a Fourth Grade Nothing.

She ventured into acting at the tender age of 10.

In addition to acting, she is also a talented nail artist. She owns a YouTube channel called GbyGNailArt, where she uploads nail art tutorials. She launched the channel in 2011, however, it appears she is not active like before.

Hannelius took her talents to a whole new level when she collaborated with Watson Creative and MINX Nails in 2014 to launch a customized nail-wrap app titled ‘Make Me Nails’.

G is close friends with actress Taylar Hender and Genevieve.

Hannelius is a huge supporter of “A Window Between World’s,” a charity organization that aims to promote art and fights domestic violence.

Her celebrity crush is Logan Lerman.