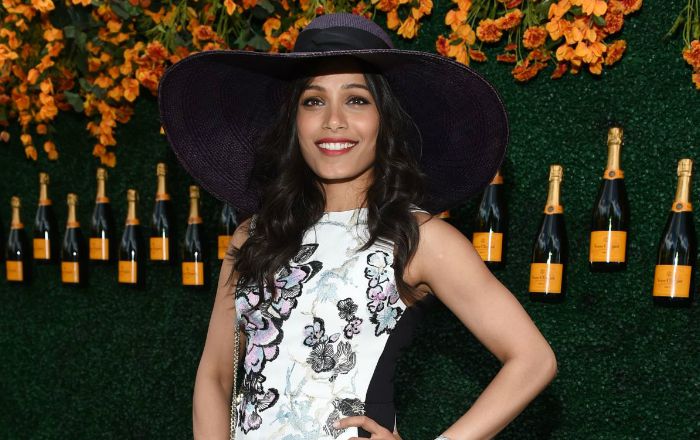 Who is Freida Pinto?

Freida Pinto is an Indian actress who gained fame after starring as Latika in Slumdog Millionaire for which she won the Breakthrough Performance Award at the Palm Springs International Film Festival. She is best known for her supporting roles in American and British films. Her breakout role came in 2011 when she was cast to star in the science fiction film Rise of the Planet of the Apes and went on to play the title character in Michael Winterbottom’s Trishna.

Freida Pinto was born on the 18th of October 1984, in Bombay (now Mumbai), Maharashtra, India. She is currently 36 years old.

Freida Pinto is the daughter of Frederick Pinto, a banker who worked as a senior branch manager for the Bank of Baroda, and Sylvia Pinto, who was the principal of St. John’s Universal School in Goregaon, Mumbai. She has an older sister, Sharon, a journalist.

Freida attended Carmel of St. Joseph School in Malad, Mumbai, and then enrolled at the St. Xavier’s College, Mumbai from where she majored in English literature and minored in Psychology and Economics.

Freida Pinto was in a relationship with her Slumdog Millionaire co-star Dev Patel from 2009 to 2014. He is six years younger than her.

She then briefly dated polo player Ronnie Bacardi in 2015. Post her split with Ronnie, she began dating photographer Cory Tran, and they got engaged in November 2019.

Freida Pinto’s first film role was in Danny Boyle’s 2008 film ‘Slumdog Millionaire’, where she played the role of Latika, the love interest of the main character Jamal, played by Dev Patel. The film was a sleeper hit in terms of box office and critical acclaim. The film was nominated for ten awards at the 81st Academy Awards, wining eight, including the award for Best Picture.

Pinto won the Breakthrough Performance Award at the Palm Springs International Film Festival, and the Screen Actors Guild Award for Outstanding Performance by a Cast in a Motion Picture, along with other cast members from the film. She was also nominated for Best Actress in a Supporting Role at the BAFTA Awards

In 2006, Pinto hosted a talk show called ‘Full Circle’ on Zee International Asia Pacific. This was her debut in television. In 2018, she had a recurring role as Vera in an American web drama series, ‘The Path’.

For her role as Latika in the 2008 British drama film Slumdog Millionaire. Her part in the film was very less, but her performance in the film earned her widespread recognition.

She got her breakthrough role when she was cast to play the title character in the 2011 British-Swedish-Indian drama film, ‘Trishna’. The film was based on Thomas Hardy’s novel Tess of the d’Urbervilles. She played a role of a teenage Rajasthani peasant, who leaves her family to work for a British-born Indian hotelier, played by Riz Ahmed. Her character was widely appreciated by critics.

Pinto has done endorsement works for brands like Airtel, eBay, DeBeers, Škoda, Visa, Vodafone India, and Wrigley’s Chewing Gum. She is also the ambassador of Plan USA’s I Am A Girl.

in July 2015, Pinto was made the ambassador for Audemars Piguet.

Pinto has a net worth of $14 million, as of 2020. This money comes from modeling, TV, commercials and films.

She wanted to become an actress since she was very young. She cites then Miss Universe Sushmita Sen inspired her to enter show business.

Pinto started her career as a model and later ventured into mainstream cinema when she was offered a role in Danny Boyle’s film Slumdog Millionaire. She won this role after she outsmarted her fellow artists who also auditioned for the role and went through six months of extensive auditions.

Freida Pinto is trained in Indian classical dance and salsa.

She auditioned for the part of Bond Girl Camille in Quantum of Solace (2008) but lost the role to Olga Kurylenko.

Pinto was considered to replace Emma Stone in Sucker Punch (2011) but lost out to Jamie Chung.

She divides her time between Mumbai, England and Los Angeles.

AskMen featured her in their “Top 99 Most Desirable Women” list, consecutively from 2010 to 2012.

In addition to her acting career, Pinto has been actively involved with several humanitarian causes and is vocal about the uplifting of women and underprivileged children.