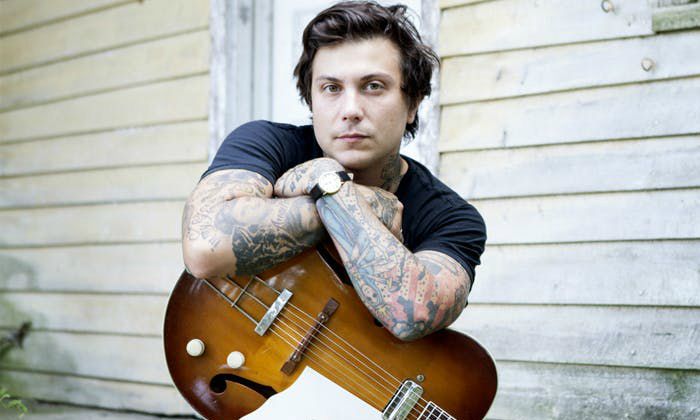 Who is Frank Iero?

Frank Iero is a popular musician, singer, and songwriter from Belleville, New Jersey, who is known for his affiliation with the punk band My Chemical Romance and the post-hardcore band Leathermouth. He served as the rhythm guitarist and back up vocalist with these two bands before going solo in 2014. Frank released his first solo album, Stomachaches, in August 2014. In addition, he has a solo punk rock band named Frank Iero and the Future Violents, previously known as Frnkiero & the Celebration and Frank Iero & the Patience.

Frank Iero was born on the 31st of October 1981, in Belleville, New Jersey, United States of America. He is currently 39 years old.

Frank comes from a family of musicians. He was born to a musician father Frank Iero and his wife Linda Iero. His parental grandfather was also a musician. His parents separated when he was very young and was raised by his mother.

For education, he attended Queen of Peace High School, a Catholic school in New Jersey and later earned a full-time scholarship into the Rutgers University. But he quit college before graduation to pursue a career in music.

Frank Iero began dating his wife Jamia Nestor in May 2006 after he proposed her during the recording of The Black Parade. The two knew each other since they were in high school. They got married on February 5, 2007, in a small ceremony attended by family and friends. They have three children together, twin daughters, Cherry and Lily, (b. September 2010) and a son, Miles (b. April 2012).

Frank Iero released his first studio album titled “I Brought You My Bullets, You Brought Me Your Love” with the band My Chemical Romance on July 23, 2002. The album sold over 100,000 copies and was certified Gold by BPI.

He went solo in 2014 and dropped his first studio album titled “Stomachaches” on August 25, 2014, on Staple Records. The album spawned three hit singles and featured 12 tracks.

Frank landed his first acting role in a supporting role in the crime thriller, ‘Addiction: A 60’s Love Story’ in 2015.

In March 2007, Frank along with the members of his band My Chemical Romance appeared on the talk show, The Tonight Show with Jay Leno.

My Chemical Romance’s third album ‘The Black Parade’ received positive reviews and went on to become a huge commercial hit. The album peaked at No. 2 on the UK Albums Chart as well as on the US Billboard 200. In addition, it peaked at No. 1 on the US Rock Albums chart.

The band’s fourth album ‘Danger Days: The True Lives of the Fabulous Killjoys’ also received favorable reviews. The album peaked at No. 8 on the US Billboard 200 and also reached the top 15 on several music charts.

The New Jersey-based rock musician has an estimated net worth of $16 million.

As a child, Frank was hospitalized several times due to health complications such as bronchitis and ear infections.

He got his start as a guitarist, playing in local bands around New Jersey and later joined the punk band Pencey Prep.

Frank joined the punk band My Chemical Romance as a co-guitarist in 2002. Since then, he has been a part of many hit singles and albums. The band split in March 2013.

He then became a front-man for the hardcore punk quintet, Leathermouth and released their debut album ‘XO’ in 2009. They disbanded in 2010.

In 2013, he joined hand with James Dewees to work on a new project, a digital hardcore act called Death Spells, which went on an indefinite hiatus in mid-2013.

He is a vegetarian. In 2008, PETA named him on the list of “Sexiest Vegetarians of the Year”.

He is an avid tattoo lover and has got many tattoos all over his body, including logos of the bands, ‘Black Flag’ and ‘The Misfits’, and many more.

He is a huge fan of Liverpool F.C.

Frank describes himself as a pro-gay rights supporter.