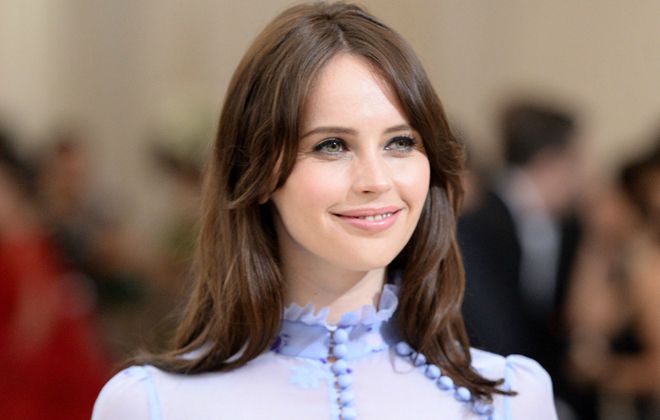 Who is Felicity Jones?

Felicity Jones is an English actress best known for her portrayal of Jane Hawking in the 2014 biopic of Stephan Hawking, The Theory of Everything, for which she earned nominations for the Golden Globe, SAG, BAFTA, and Academy Award for Best Actress. She also starred as Jyn Erso in Rogue One: A Star Wars Story. Her other notable films include The Tempest, The Amazing Spider-Man 2, True Story, Inferno, Like Crazy, and the fantasy drama A Monster Calls.

Felicity Jones is the daughter of journalist father Gareth Jones and his wife Julia Jones, who earlier worked in advertising. She has an older brother, who works as a film editor.

Her uncle, Michael Hadley, is an actor, who largely influenced her to become an actress.

Felicity was educated at the Kings Norton Girls’ School, and King Edward VI Handsworth School. She was on hiatus for a year between high school and college, during which she starred in the TV series Servants.

She studied English at Wadham College, Oxford, graduating with an upper second in 2006.

Jones married director Charles Guard in June 2018 after dating for three years. The couple announced their engagement in May 2017 and tied the knots in June 2018. In December 2019, they announced that they are expecting their first child, which is due in September 2020.

Prior to her marriage, she was in a relationship with sculptor Ed Fornieles from 2003 to 2013.

Felicity Jones made her acting debut in 2008, playing Young Ruth in the British drama film, Flashbacks of a Fool.

In 1996, Jones appeared in the British television family film, The Treasure Seekers, for her role as Alice Bastable.

From 1998 to 1999, she played Ethel Hallow in the first season of the British-Canadian TV series The Worst Witch.

She has done endorsement work for Dolce & Gabbana’s Khol Collection for eyes and nails.

As of 2020, Felicity Jones has a net worth of $6 million, earned from her film and television appearances.

Jones’ parents divorced when she was three years old. Her mother raised her and her brother.

Her uncle is actor Michael Hadley.

She was just 12 when she was cast in the British TV movie The Treasure Seekers, opposite a young Kiera Knightley.

She is a big fan of the BBC gangster series Peaky Blinders.

Jones can be seen in the 2018 movie, On the Basis of Sex, a biography of United States Supreme Court Justice Ruth Bader Ginsburg, directed by Mimi Leder and co-starring Armie Hammer and Justin Theroux.