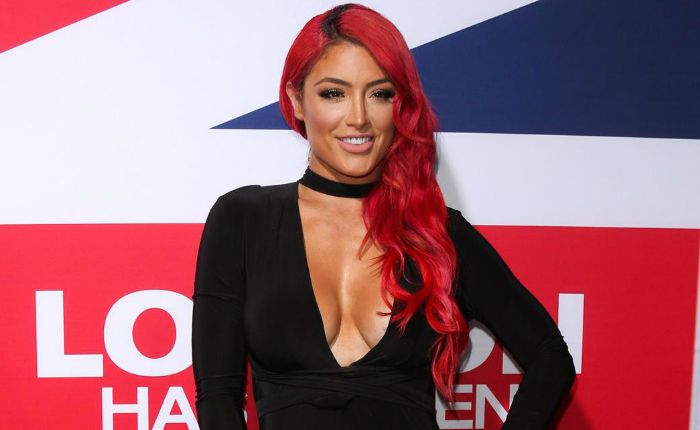 Eva Marie is an American professional wrestler, fashion designer, fitness model, and actress, who is widely known as a wrestler with WWE SmackDown and a manager of The Bella Twins. She became a household name among the American masses after becoming the main cast in the reality TV series, Total Divas. She officially bid goodbye to WWE in August 2017.

Eva Marie is the youngest of four children to Barry and Josie Nelson. She has three older brothers, Nathan, Neal, and Nick Nelson. She was raised along with her brothers in Concord, California

She is of Mexican descent on her mother’s side and Italian on her father’s side.

Eva obtained her associate degree in art from Diablo Valley College in Pleasant Valley, California. She, then, enrolled at the California State University, Fullerton, where she graduated with a Bachelor of Arts in business management and a minor in human resource.

In 2017, she made her theatrical film debut with the thriller film, Inconceivable, starring as Linda alongside Gina Gershon, Faye Dunaway, and Nicolas Cage.

In 2013, she first starred in the American reality television series, Total Divas as the main cast from 2013 to 2014. The series gives viewers an inside look into the lives of female WWE wrestlers from their work within WWE to their personal lives with the inclusion of behind the scenes footage.

Natalie has also served as a guest judge in the Miss Teen USA pageant in 2016. Natalie has appeared in various television shows such as 12 Corazones, Entourage, CSI: New York, America’s Got Talent, and 90210.

Eva Marie appeared in a Fitness Blowout infomercial as well as in Marino Fitness Campaign and appeared in a Sketchers commercial.

As of 2022, Eva Marie has a net worth of $2 million US dollars. She collaborated with Bellami Hair to launch her own line of hair extensions, called TestaRossa in 2015. She launched her own fashion line, NEM Fashion in 2016. She lives in a luxurious house with her family in Los Angeles, California.

During her school days, she was an excellent soccer player and went on to play for her school team as well as played soccer for California State University, Fullerton.

She was inclined to become a professional soccer player, but after graduation, she shifted her focus towards modeling and acting.

In December 2012, Eva appeared on the Sports Illustrated website as the Lovely Lady of the Day.

She appeared in the September edition of Maxim magazine.

Natalie Eva Marie has been featured in a couple of video games – WWE 2K16 and WWE 2K17.

She is an avid San Francisco Giants fan.

On August 4, 2017, Eva announced that she quit WWE to explore opportunities outside of wrestling.

She returned to wresting in 2020 and signed a contract with WWE.