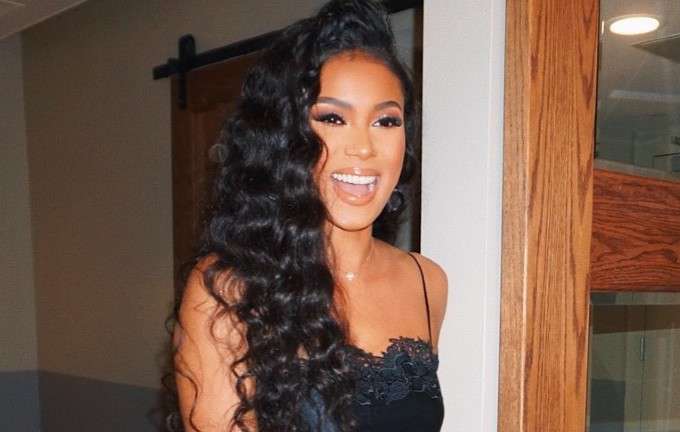 Born and bred in Baltimore, Maryland, Eniko Parrish became the darling of tabloids after her romantic relationship with actor and comedian, Kevin Hart came to light in 2009. Before that, she was known as a model, having worked with various fashion labels and designers.

Eniko and Kevin got married on August 13, 2016, near Santa Barbara, California, and they have a son together. Her career really took off after she was linked to Kevin, and as a result, she achieved widespread popularity and eventually landed on major modeling and acting gigs. She also became a major Instagram influencer with her handle boasts more than 3.5 million followers.

She is of Afro-Jamaican and Asian descent.

Eniko is the daughter of Jamaican parents who are also believed to have got Asian links. Despite her being quite famous, thanks to her husband Kevin Hart, she hasn’t divulged any details about her parents or her early life.

The Maryland native started dating comedian and actor Kevin Hart in 2009 while he’s still married to his first wife Torrei Hart. One year later, Kevin parted ways with Torrei and divorced her in 2011.

Eniko and Kevin got engaged in 2014. The pair took their relationship to next level when they decided to get married in 2016 and their wedding happened on August 13, 2016, in Santa Barbara, California. She gave birth to their son Kenzo Kash Hart on November 21, 2017. They welcomed their second child together, a daughter named Kaori May, on September 29, 2020.

Through her marriage with Kevin, Eniko is also a stepmother to his two kids from his previous marriage – Heaven Leigh (b. March 22, 2005) and Hendrix (b. November 8, 2007)

She is famously known as the wife of Kevin Hart, a popular comedian, and actor.

Besides being Kevin’s wife, Eniko Parrish is also an Instagram model. She has over 3.5 million followers on her official page.

While there is not much information about her net worth right now, it has been reported that Eniko Parrish has an estimated net worth of $2 million. All that money she has now come from her lucrative modeling career. In addition, she has a fashion line that as well contributes to her net worth.

You might be still interested to know how rich is her husband, Kevin Hart. He is considered to be the most bankable actor in the industry who has several successful credits to his name. He’s known for his performance in the movie Jumanji: The Next Level, starring Dwayne Johnson, and Jack Black in the leading roles. Kevin began his career as a standup comedian and later pursued acting and is quite successful in both. Kevin’s net worth now stands at $200 million.

She spent her early life in Maryland, Baltimore, and later moved to Los Angeles to pursue a career in modeling.

She has appeared in Tv shows such as Entertainment Tonight and E! Live.

Eniko and Kevin went to St. Barl’s Island for their honeymoon.

In December 2017, Kevin publicly confessed that he cheated on his wife Eniko and made a public apology to her and his children. He has a fling with model Montia Sabbag. She accepted his apology.

Being a fitness freak, Eniko Parrish often posts pictures from her workout routine and yoga classes on her Instagram page.