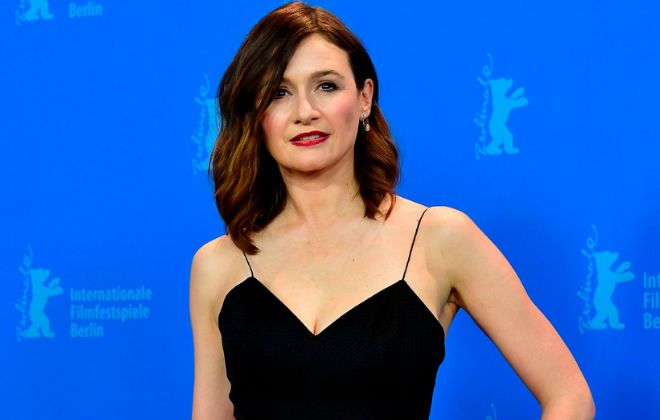 Emily Mortimer is a famous English actress and screenwriter most widely recognized for her work in both television and films. She earned massive fame for her starring role as Elizabeth Marks in Lovely and Amazing, for which she won the Independent Spirit Awards for Best Supporting Female. She has appeared in a number of independent productions and Hollywood movies, including Lars and the Real Girl, Young Adam, Chaos Theory, Harry Brown, Shutter Island (2010), and Dear Frankie. She has also starred as Mackenzie McHale in the HBO series The Newsroom.

Emily Mortimer was born on the 1st of December 1971. in London, England, United Kingdom. She is currently 51 years old.

Emily Mortimer is the daughter of John Mortimer and his second wife Penelope (née Gollop). Her father is a dramatist and barrister. She has a younger sister named Rosie and two older half-siblings, Sally Silverman and Jeremy, by her father’s first marriage to author Penelope Fletcher. She also has a half-brother named Ross Bentley from her father’s relationship with actress Wendy Craig.

Mortimer attended St Paul’s Girls’ School in west London and went on to study English Literature and Russian at Lincoln College, Oxford University. There she performed in several plays.

She studied acting at the Moscow Arts Theater Drama School for two years.

Emily Mortimer married American actor Alessandro Nivola on January 3, 2003, in the village of Turville in the Chilterns, Buckinghamshire. They have two children, a son, Samuel John Nivola (b. September 26, 2003), and a daughter, May Rose Nivola (b. January 15, 2010).

Emily Mortimer made her acting debut with the historical adventure film, The Ghost and the Darkness in 1996, playing the role of Helana Patterson.

Her first television appearance came in 1994 when she was cast as Angela in an episode titled “The Virgin of Vitebsk” of the TV series Under the Hammer.

Having played Elizabeth Marks in Lovely and Amazing (2001), Cathie Dimly in Young Adam (2003), Rachel Solando in Shutter Island (2010), and Mackenzie McHale in the HBO political drama series The Newsroom from 2012 to 2014.

As of 2023, Emily’s net worth sits at $8 million. She charges a hefty paycheck per episode for her work in television series. She lives with her family in Los Angeles.

She began her acting career at a very young age, performing in school plays throughout her school years. She continued to perform in stage productions while in college and went on to work as a writer for the Daily Telegraph and writing screenplays.

She shifted to screen acting early in her career and has since appeared in numerous film and television roles.

She can speak fluently in Russian.

In addition to on-screen roles, she did voiceovers for Cars 2 and Howl’s Moving Castle.

Emily was one year behind the famous actress Rachel Weisz at St Paul’s Girls’ School.

In 2021 she starred in the TV miniseries The Pursuit of Love as The Bolter, for which she received a British Academy Television Awards nomination for Best Supporting Actress.