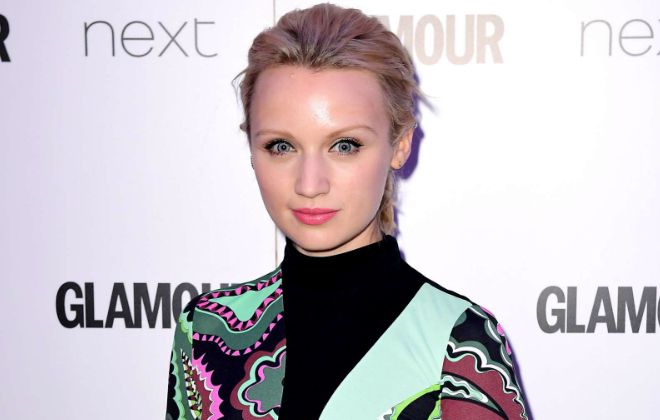 Emily Berrington is an English actress and model who first gained attention for her starring role as Niska on AMC’s Humans. She had a recurring role in The White Queen and is also known for her role as Simone Al-Harazi in 24: Live Another Day. Her film credits include The Inbetweeners 2, The Last Showing, and The Hippopotamus.

Emily Berrington was born on the 7th of December 1988, in Oxford, Oxfordshire, England, United Kingdom. She is the daughter of English parents who were both social workers. She’s the third of four siblings that include an older sister, Amy Berrington, who works as a professor, an older brother named Tom Berrington, and a younger sister, Katie Berrington, who is a writer.

Berrington attended Cheney School in Headington, Oxford, England. She then enrolled at King’s College London, from where she graduated with a degree in Development Geography. She studied acting at the Guildhall School of Music and Drama, graduating in 2012.

Emily has been in a relationship with Ben Lloyd-Hughes. They have been dating for several years now.

Emily got her first acting job in 2013, playing the role of Clare in the biographical comedy-drama film, ‘The Look of Love’ in 2013. But, her role was uncredited in the film.

Her first credited appearance was in the comedy film, The Inbetweeners 2, in 2014, in which she played the role of Katie.

Emily’s television debut came in 2013 when she was cast as Jane Shore in the drama series, ‘The White Queen’.

Emily Berrington is highly praised for portraying the role of Niska in the TV series Humans. She has also appeared in many hit TV shows like Defending the Guilty, The Miniaturist, Sons of Liberty, 24: Live Another Day, and The White Queen.

Her parents were social workers who subsequently started a training business for the public sector.

While studying at the King’s College London, she wrote her dissertation on “the economic collapse of Argentina and the resulting rise of cooperativism”

Though she was involved in youth drama during her teens, she pursued a career in politics, working at the House of Commons for Labour Party MP Siobhain McDonagh of the London constituency of Mitcham and Morden.

Emily decided to quit politics because she found it terrifying, male-dominated, and intimidating for young blonde women.

She was featured in publications, including Grazia UK, S Magazine UK, British Vogue, Lula, Vulkan, My 71, and Fiasco.

While studying acting at the Guildhall School of Music and Drama, Emily Berrington performed in the Almeida Theatre’s production of Children’s Children and Michael Winterbottom’s The Look of Love.

She portrayed the character of Niska in Channel 4 series Humans from 2015 to 2018.