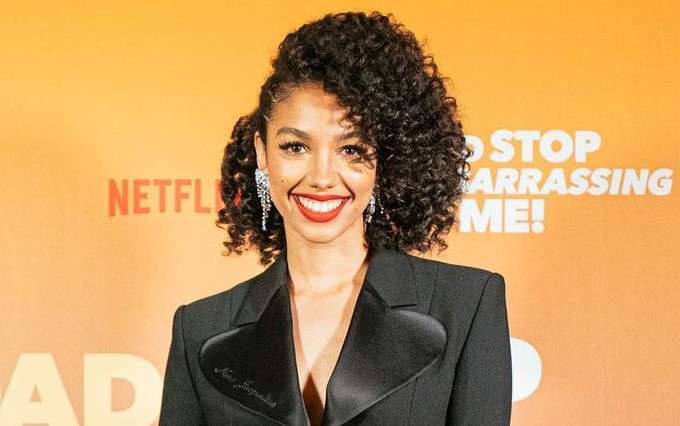 Corinne Foxx is an American actress and model. Well, she had spent the larger part of her life in the spotlight, thanks to her famous father Jamie Foxx, a renowned actor and singer. As a successful model, Corinne has modeled for brands like Ralph Lauren, Dolce & Gabbana, Kenneth Col, and Yeezzy Line. She made her breakthrough with the movie 47 Meters Down: Uncaged as Sasha and went to star in TV shows and movies like Safety, All-Star Weekend, and Live in Front of a Studio Audience. She is also an executive producer, having executive produced the comedy series Dad Stop Embarrassing Me! in 2021.

Corinne’s parents are Eric Marlon Bishop, better known by his stage name Jamie Foxx, and his ex-girlfriend Connie Kline. His father is a well-known actor and singer. Being a child of a famous celebrity, she grew up attending red carpets and major Hollywood events with her father.

She has a younger half-sister named Anelise.

Corinne was educated at Sierra Canyon School where she was a cheerleader that eventually landed her on the cover of American Cheerleader in 2011. She then attended the University of Southern California where she studied Public Relations. At the university, she was a member of the Pi Beta Phi sorority.

Talking about her dating life, Corinne Foxx hasn’t shared much about her relationship status with the public. She’s romantically linked up with a guy named Jow Hooten. The two started dating in 2019 and it is not still clear whether they are still together as the last photo featuring his boyfriend was posted to her Instagram in 2019.

She had previously been in a relationship with Austin Lantero.

Corinne Foxx began her professional modeling career back in 2014 when she debuted at the Bal des débutantes. Two years later, she walked for the first time at New York Fashion Week’s debut in 2016, representing Kanye West’s Yeezy line.

Her first major role came in 2009 in the horror sequel 47 Meters Down: Uncaged, where she played the role of Sasha. Her next appearance was in Reginald Hudlin’s sports biopic Safety, starring Jay Reeves in the lead role. In the film, she plays a sports journalist student Kaycee Stone and a close friend of Ray McElrathbey, the principal character.

Her other works include All-Star Weekend, Carpool Karaoke, Live in Front of a Studio Audience and Dad Stop Embarrassing Me!

She signed with LA Models at age 20 which marked the beginning of her modeling career.

She was awarded the title of Miss Golden Globe in 2016.

Corinne has modeled for several brands including Yeezy, Dolce & Gabbana and Ralph Lauren.

She adopted her father’s surname Foxx in 2014.