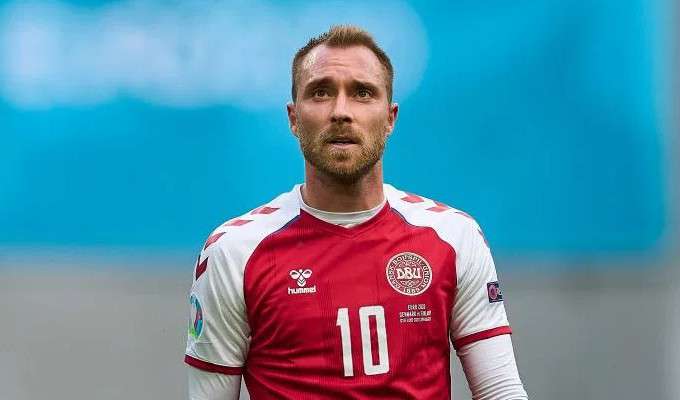 Christian Eriksen is a Danish footballer who currently plays for Serie A club Inter Milan and the Danish national team. He started playing football for local clubs at an early age. After enjoying a successful career as a junior, Christian kick-started his senior career with Ajax, a renowned Dutch club. He turned pro in 2010 and plays in the position of an attacking midfielder.

Well, he’s highly regarded as one of the best players in the history of Denmark. He has won the Danish Player of the Year award a record four times. On 12 June 2021, Eriksen collapsed on the ground after he suffered a fatal cardiac arrest during a group-stage match against Finland at the UEFA Euro 2020 in Copenhagen. Shortly afterward, he was resurrected from the arrest through CPR and was later hospitalized.

Christian is the son of Thomas Eriksen and Dorthe Eriksen. Both his parents are football coaches. He has a sister named Louise Eriksen, who is also a footballer and is the captain for KoldingQ in the Elitedivisionen.

Christian Eriksen has been in a relationship with his girlfriend Sabrina Kvist Jensen for several years now. They welcomed their first child, a son, Alferd on June 4, 2018. They also have another child.

At such a young age, Christian Eriksen has won so many honors and titles. He’s a born prodigy and possibly Denmark’s greatest-ever footballer this generation has seen. With his impressive performances for the past decade, he has forged a place for himself as one of the best attacking midfielders in the world.

With annual earnings of more than $10 million, it’s no surprise that Christian Eriksen is one of the wealthiest sportsmen in Denmark. As of 2023, he has a net worth of about $25 million. In addition to club contracts, he also earns money from endorsements and advertisements.

On 12 June 2021, Christian Eriksen suffered a cardiac arrest and collapsed on the ground during his opening UEFA Euro 2020 group stage match against Finland at the Parken Stadium in Copenhagen. The medical team immediately performed CPR, while he became conscious and was hospitalized later. The match was suspended for a while and later re-commenced that evening, resulting in a 1–0 victory for Finland.

He began playing football at the age of three and was coached by his dad during his early days.

Followed by a successful youth career, Christian joined the Dutch club, Ajax in 2008. While in Ajax, he played so well that the club extended his contract for another three years.

At age 18, he made his professional debut for Dutch club Ajax and made his international debut for Denmark that same year against Austria at the 2010 FIFA World Cup. He was the youngest player that season.

He showed exemplary performance in all the matches he played which brought him so much attention that he became a hot player that season.

In 2013, he moved to Premier League club Tottenham Hotspur from Ajax for a transfer fee of £11 million. He spent the next seven years appearing for the club and made 226 appearances across all competitions and scored 51 goals.

Eriksen has an impeccable record of being named the Danish Player of the Year for a record four times between 2013 and 2018.

In 2020, he departed from Tottenham and moved to Serie A club Inter Milan on a four-and-a-half-year contract. He would make more than £10 million per season apart from other incentives.

He has played all formats of football representing Denmark at youth level and senior squad.