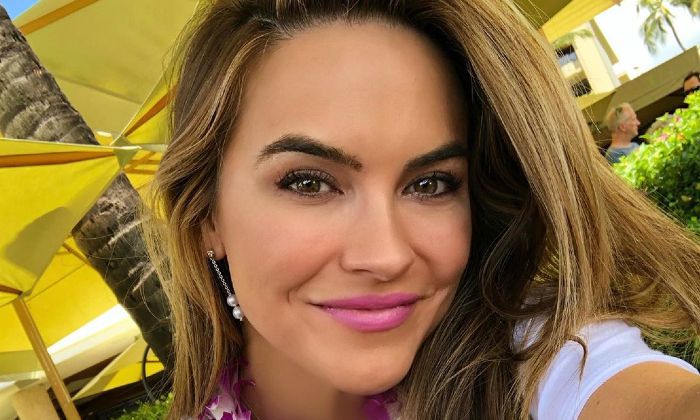 Chrishell Stause is an American actress probably best known for her appearance on Netflix’s “Selling Sunset” in 2020, earning a lot of fame and recognition. She made her mark in the television industry with the ABC’s soap opera, “All My Children,” playing Amanda Dillon Martin, a role that she played for straight six years.

Furthermore, she is also known for her role as Jordan Ridgeway in the NBC daytime soap opera “Days of Our Lives” from 2013 to 2020 and has been a series regular on Youthful Daze since 2014. Chrishell’s other acting credits include parts in Mistresses, Misguided, The Young and the Restless, and Eve of Abduction.

Chrishell Stause was born on the 21st of July 1981, in Draffenville, Kentucky, United States of America. She is currently 39 years old.

Very little is known regarding Chrishell’s family, education, and early life. She hasn’t shared a lot of her personal matters with the media because of privacy.

But she’s got an interesting story on how she got her name Chrishell – a combination of Chris and Shell. Her mother was at a Shell gas station when she got admitted into labor. She was helped by a man named Chris and thus her mother named her Chrishell.

She holds a bachelor’s degree in Theater from Murray State University.

Chrishell Stause was married to actor Justin Hartley from 2017 to 2019. The couple started dating in early 2014 and got engaged in July 2016, followed by their marriage on October 28, 2017, held at Calamigos Ranch in Malibu, California.

But unfortunately, things didn’t go well between them, eventually ending their relationship in late 2019. Her ex-husband, Hartley, filed for divorce, citing irreconcilable differences in November 2019 whereas, Stause, filed for dissolution of the marriage a month later.

Chrishell was previously linked to actor Matthew Morrison, with whom she got engaged in December 2006. They called off the engagement shortly after in 2007. She was also in a relationship with Bachelorette Graham Bunn from 2007 to 2010.

Chrishell Stause’s first feature film role came in 2008 when she played Robin in the film, “Scaring the Fish.

She launched her acting career in 2005 when she replaced actress Alexis Mantra in the ABC soap opera “All My Children,” playing the role of Amanda Dillon. The series was so popular that eventually made a household name in America.

With no doubt, Chrishell Stause has achieved a lot of success since the beginning of her career. Apart from some guest spots, she has appeared in a handful of popular television shows.

Her debut appearance was itself a major break for her. She was cast as Amanda Dillon in the ABC soap opera “All My Children” in 2005. She was a part of the series until it was canceled in 2011. After that, she landed on the NBC soap opera “Days of Our Lives,” in which she played Jordan Ridgeway from 2013 to 2015 as a series regular. She left the series in 2015 but returned to it as a recurring cast in 2019.

In 2014, she became a series regular web series, “Youthful Daze”, which is still airing on Vimeo. She stars alongside Bryan James and Jen Lilley in the series.

She had a recurring role as Bethany Bryant in the CBS soap opera, “The Young and the Restless” in 2016. In 2019, she appeared in the first season of the reality television series, “Selling Sunset,” which premiered on Netflix. She will reprise her role in the second season as well, which will premiere on May 22, 2020.

With more than a decade of a fruitful acting career, Chrishell Stause’s life is already a success story. She has an impressive amount of net worth that amounts to $5 million, as of 2023.

Over the years, Chrishell Stause has gained a huge social following., thanks to her successful acting career. She has got nearly 300k followers on her @chrishell.stause Instagram account and her @chrishell7 Twitter account has amassed over 50k followers.

After graduation, she moved to Los Angeles and became a member of the improvisational troupe, The Groundlings.

She is half Japanese and half Spanish.

Besides acting, she is also a writer and worked as a scriptwriter for operas like “Day of our Lives,” “Young and the Restless,” and “All my Children.”

In fact, her scriptwriting skills helped her to become an actor.

She has a dog named, Presley.

Chrishell is good friends with her All My Children co-star Melissa Claire Egan.