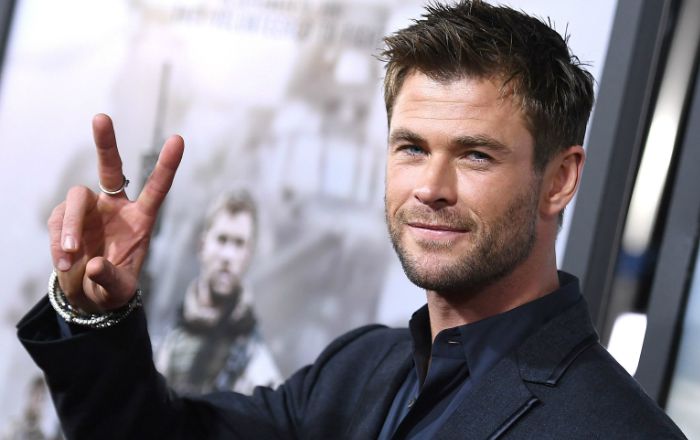 Chris Hemsworth is an Australian actor known for his role as Thor in the Marvel Cinematic Universe films. He first gained fame as an actor, playing Kim Hyde in the Australian TV series Home and Away. His other notable films include Snow White and the Huntsman (2012), Red Dawn (2012), Rush (2013), Blackhat (2015), Ghostbusters (2016), and 12 Strong (2018).

Chris was born the middle of three boys to Leonie (née van Os), an English teacher, and Craig Hemsworth, a social services counselor. His other two brothers are Luke (older) and Liam (younger), both actors. His maternal grandfather is a Dutch immigrant and his maternal grandmother is of Irish descent. He is also of English, Scottish, and German descent.

He studied at high school at Heathmont College in Victoria, Australia.

Chris Hemsworth married Spanish actress Elsa Pataky in December 2010. Together, they have three children, a daughter, India Rose Hemsworth (b. May 8, 2012), and twin sons, Tristan Hemsworth and Sasha Hemsworth (b. March 18, 2014).

In 2002, Hemsworth was cast in two episodes of fantasy television series, Guinevere Jones as King Arthur. This role marked his debut in television.

His portrayal of Kim Hyde in the Australian TV series Home and Away earned him much-needed acclaim which led him to land leading roles in films.

Arguably, Chris is one of the highest-paid actors in the world. He was included in Forbe’s Highest-Paid Celebrities list back to back in 2018 and 2019, ranking 31st and 24th position, respectively. Chris Hemsworth’s net worth in 2023 is estimated at $130 million dollars. He lives in Byron Bay with his family. He owns an Acura MDX.

Chris learned American English at Screenwise Film & TV School for Actors in Sydney, Australia. He worked a lot to gain an American accent for Hollywood films.

He voiced the characters Thor and Kevin Beckman in the video games, Thor: God of Thunder and Ghostbusters, respectively.

In 2006, Hemsworth appeared as a contestant on the fifth season of Dancing with the Stars Australia, partnered with professional dancer Abbey Ross.

He is a fan of Australian football and backs Western Bulldogs.

Hemsworth was named as one of Cosmopolitan’s Fun and Fearless men in 2011.

In 2013, Chris was ranked at #7 in Glamour’s list of “50 Sexiest Men”, behind his younger brother Liam Hemsworth.

He will reprise the role of Thor in the Avengers: Infinity War’s sequel, planned for a May 3, 2019, release in the US.