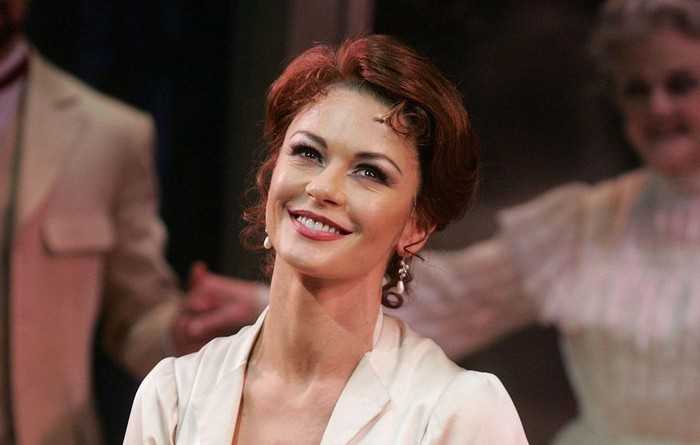 Catherine Zeta-Jones is an award-winning Welsh actress who is probably best known for her starring role as a murderous singer Velma Kelly in the 2002 musical Chicago, which earned Academy and BAFTA Awards for Best Supporting Actress. Starting her career in the early ’80s, Catherine has appeared in a number of high-profile films, including the likes of Traffic (2000), Intolerable Cruelty (2003), Ocean’s Twelve (2004), The Terminal (2004), and No Reservations (2007). Her television credits include Catherine the Great, Feud: Bette and Joan, Cocaine Godmother, Queen America, and Prodigal Son.

Catherine Zeta-Jones was born on September 25, 1969, in Swansea, Wales, to David Jones and Patricia Jones. Her father owned a sweet factory, while her mother worked as a seamstress. She is 51 years old and is of Welsh and Irish Catholic descent. Her zodiac sign is Libra. Check out to find out which celebrities share their birthday with Catherine.

Born as the middle of three siblings, she has an older brother, David Jones, a development executive, and a younger brother, Lyndon Jones, who works at her production company. She fell in love with acting when she was a little girl and attended Dumbarton House School, a private school in Swansea.

Her parents put her in the Hazel Johnson School of Dance when she was 4 years old, and from there, she made it to various dance competitions as well as appeared in her school productions. At age 9, she made her stage debut, playing one of the orphan girls in a West End production of the musical Annie.

She took a three-year course in musical theatre at the independent Arts Educational Schools in Chiswick, London to hone her acting skills. By the time, she made her big-screen debut, she was already an established actress in the stage circuit.

Catherine Zeta-Jones broke out into the acting scene in 1990 with the French-Italian film, 1001 Nights, starring alongside Thierry Lhermitte and Gérard Jugnot. From there, she began scoring major roles in films.

Her first of many successful movies was the 1998 American film, The Mask of Zorro, in which she played the role of Eléna Montero opposite Antonio Banderas and Anthony Hopkins. The film was a massive hit and she eventually landed more leading roles.

As the most sought-after actress during the 90s, Catherine ruled Hollywood and she’s one of the finest actresses during her time. Not only has she been noted for her pretty face and sexual appearance, but she has also made the audience go vow with her extraordinary acting performance.

Catherine’s most successful film to date was Rob Marshall’s Chicago, a film adaptation of the Broadway musical of the same name. Released in the year 2002, she played opposite Renée Zellweger as the murderous nightclub singer Velma Kelly, a role that earned her several prestigious awards, including the Academy Award, SAG Award, and the BAFTA Award.

Throughout her acting career, she was in the spotlight. Her most notable acting projects include Traffic, Ocean’s Twelve, The Legend of Zorro, Side Effects, Red 2, Feud, and Prodigal Son.

Zeta-Jones started dating actor Michael Douglas shortly after meeting him at the Deauville Film Festival in France in August 1998. He’s 25 years older than her. The couple got engaged on December 31, 1999, and married on 18 November 2000 at the Plaza Hotel in New York. It was a lavish wedding that BBC named the “wedding of the year,” which cost about £1.5 million.

Having been in the acting scene for almost four decades, Catherine is definitely one of the most successful and the richest actors in the entertainment industry. Acting isn’t her only source of income. She also earns huge paychecks from endorsement deals. In 2002, she signed a contract with T-Mobile for a reported sum of $20 million per year.

She was named after her grandmothers, Catherine Fair and Zeta-Jones.

She started learning dance at age 4 and is good at tap dancing.

Catherine was just 12 years old when she started her acting career.

Catherine won the Tony Award for Best Actress in a Musical for her leading role in Broadway’s 2009 revival of A Little Night Music.