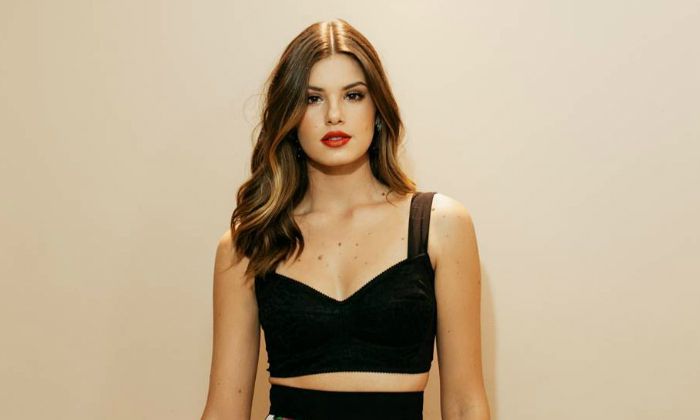 Camila Queiroz is a Brazilian actress and model who is best known for her work as Arlete Brito Gomes on the Brazilian award-winning telenovela ‘Verdades Secretas’ and as Mafalda Pereira Torres in ‘Êta Mundo Bom!’ She won several awards and accolades for her stellar performance in ‘Verdades Secretas.’

Camila Queiroz was born on the 27th of June 1993, in Ribeirão Preto, São Paulo, Brazil. She is currently 28 years old.

Camila is the middle child of the three children to parents Eliane Tavares, a manicurist, and Sérgio Queiroz, who is a carpenter in Sao Paolo, Brazil. She has two sisters, Melina, and Caroline Queiroz.

Unfortunately, information about her education is not available on the web.

Camila Queiroz is married to actor Klebber Toledo since 2018. The couple got married at a religious ceremony at the Essenza Hotel in Jericoacoara in August 2018.

She was previously in a relationship with model Lucas Cattani from 2013 until 2016.

Camila Queiroz made her small-screen debut with the Brazilian award-winning telenovela, ‘Verdades Secretas’ (Secret Truths), in 2015. She played the role of Arlete Brito Gomes (Angel) in the series, a role that earned her several awards including Extra Television Award, Capricho Awards, and Troféu Imprensa.

She is widely known for her work in such Brazilian telenovelas as Verdades Secretas, Êta Mundo Bom, and Pega Pega.

She has quite a large following on social media, with more than 16 million followers on Instagram and over 500k followers on Facebook.

She left home to live alone in Sao Paolo when she was 14 years old.

She won the Pernambucanas Faces Modeling Competition which led her to sign a contract with Ford Models.

At age 16, Camila relocated to Japan and lived there for two years, working for a local modeling agency.

She migrated to New York at the age of 18 and continued her modeling career. During this time, she also modeled for the Armani Exchange brand.

At age 21, she returned to Brazil after she was offered a role in the TV series, Verdades Secretas.

In 2016, she appeared in the music videos of Luan Santana’s “Love of the Interior” and Nego Borel’s “She Goes Beyond.”

Camila appeared in the musical Isaura Garcia where she played around six characters in 2018.