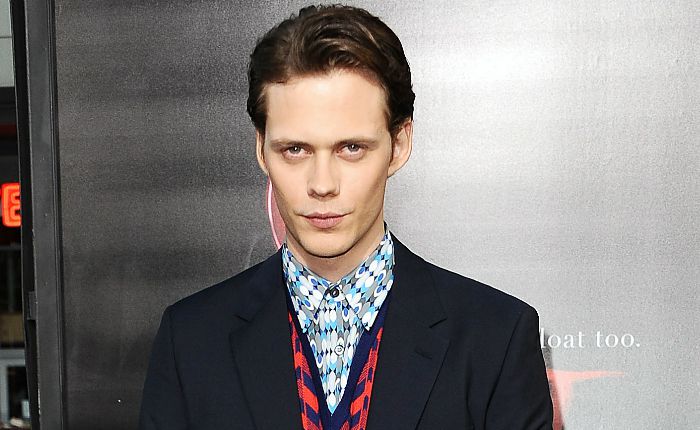 Bill Skarsgard is a Swedish actor who gained immense popularity for playing Roman Godfrey in the Netflix original horror series ‘Hemlock Grove’ and Pennywise the Dancing Clown in the horror film ‘It’. Starting out his career as a child actor, he went on to star as Matthew in The Divergent Series: Allegiant and as Merkel in the espionage thriller Atomic Blonde. His performances in both movies catapulted his fame and that brought him a lot of movie offers. As of 2023, Bill Skarsgård has a net worth of $5 million.

Bill Skarsgard was born on the 9th of August 1990 in Vällingby, Sweden. He is currently 32 years old.

Hailing from a family of actors, his father, Stellan Skarsgård is a decorated actor and his mother’s name was My Skarsgård. His stepmother, Megan Everett, is a physician. He has seven siblings – his older brothers Alexander, Gustaf, and Sam and younger brother Valter are all actors. His younger sister Eija is a model. Ossian and Kolbjörn are his half-brothers born in his father’s second marriage.

Details about his formal education aren’t made available on the web.

Bill Skarsgård has been dating Swedish actress Alida Morberg since 2016. Alida is five years senior to him, who is the daughter of Swedish actor and film director Per Morberg. She is best known for her roles in the movies Insane (2010) and Sensoria (2015). They welcomed their daughter in October 2018.

Bill Skarsgård had his first feature film appearance as a child actor in the movie ‘White Water Furry’ as Klasse in 2000.

His first adult role was as Erik in the spic film ‘Arn—The Kingdom at Road’s End’, which was based on Jan Guillou’s trilogy about the fictional Swedish Knights Templar Arn Magnusson. It is a sequel to the 2007 film ‘Arn: The Knight Templar’. The film also had his father and older brother, Gustaf Skarsgård.

Bill won his first acting job playing Tony in two episodes of the mini-series ‘Laura Trenter – Dad, the Policeman’ in 2002.

His performance in Joe Wright’s historical romance film ‘Anna Karenina’ won the likes of the critics and brought him early success. The film is an adaptation of Leo Tolstoy’s novel of the same name that was published in 1877. Revolving around the titular character Anna Karenina (played by Keira Knightley), the film was a huge commercial success and it earned four nominations at the 85th Academy Awards.

Bill became known to the worldwide audience after he played It / Pennywise the Dancing Clown in the 2017 American supernatural horror film ‘It’. It was based on the 1986 novel of the same name by Stephen King. The film met with cortical acclaim and was a huge commercial success, minting more than $700 million at the worldwide box office against a production budget of $35 million. Skarsgård was nominated for a handful of awards, including the Teen Choice Award for Choice Movie Villain and the Saturn Award for Best Supporting Actor.

His other noted works include Atomic Blonde, Deadpool 2, Hemlock Grove, and Castle Rock.

As of 2023, Bill Skarsgård has a net worth of $5 million, most of which he made from his successful acting career.

Standing at 6′ 3½” tall, Skarsgård is the shortest of his siblings. His brother Gustaf is an inch taller and both Alexander and Sam are two inches taller.

Though he was born in a family of actors, he didn’t take up acting seriously when he was young.

His first American film was ‘The Divergent Series: Allegiant’, a 2016 science fiction thriller film, in which he played the role of Matthew.

Maze Runner actor Will Pouter was first considered for the titular role in the movie ‘It,’  but it later went to Bill. During an interview, he confessed that he had bad dreams after playing that character in the film.

Bill will reprise the role of Pennywise in the upcoming movie “It: Chapter Two”.