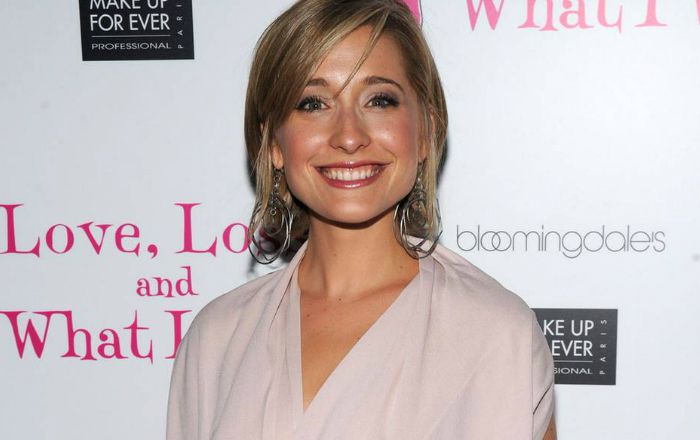 Allison Mack is an American actress who’s been on the news ever since she was arrested by the FBI on charges of sex trafficking, and forced labor conspiracy in April 2018. She was a top-level executive in NXIVM, a multi-level marketing organization. As an actress, Allison gained fame for her roles as Chloe Sullivan on the WB/CW series Smallville and as Amanda on the FX series Wilfred.

Allison Mack was born to Jonathan, an opera singer, and his wife Mindy. She has two siblings, Shannon, and Robyn Mack. Her family moved to Long Beach, California, when she was 2 years old. There, she attended The Young Actors Space in Los Angeles and also studied at the Los Alamitos High School.

Allison Mack was in a relationship with her longtime boyfriend Canadian actor Chad Krowchuk from 2003 until 2008. They even got engaged sometime, but she said in her blog, “marriage was something she didn’t see herself committing to anytime soon.”

In 2013, she became engaged to fellow Smallville actor Sam Witwer but they called it off a year later.

She then dated Silvio Spacinschi. In February 2017, Mack married actress Nicki Clyne, which later proved to be a staged one to get around US immigration laws. The pair separated soon after and they eventually filed for divorce in December 2020.

Allison made her acting debut playing a little girl in the film, ‘Police Academy 6: City Under Siege’ in 1989.

In 1989, Allison Mack made her first appearance as Nettie in the television film ‘I Know My First Name is Steven.’

Her first major television role came in an episode of the WB series ‘7th Heaven,’ in which she gained attention playing a teenager who cut herself.

For her starring role as Chloe Sullivan, one of Clark Kent’s best friends, in the WB/CW hit Superman series, Smallville, from 2001 to 2011.

She has appeared in television commercials for German Chocolate from a young age.

Her Role in NXIVM

In early 2010, many media outlets reported that Mack joined NXIVM, a multi-level marketing organization. The company was founded in 1998 by Keith Raniere as a personal development company. The company has been accused of running a cult program that involved recruiting women for secret societies and forcing them into sexual slavery.

Mack was arrested by the FBI on April 20, 2018, in Brooklyn, on charges of sex trafficking, sex trafficking conspiracy, and forced labor conspiracy. She was accused of recruiting women into “DOS” or “The Vow”, a sex cult described as a secret society. She later blackmailed them to engage in sexual activity with Raniere for which she was paid.

Mack was released on a $5 million bond and held under house arrest under the custody of her parents in California on April 24, 2018. A year later on April 9, 2019, Mack pleaded guilty to racketeering conspiracy and racketeering. She will be sentenced in September.

She was born in Germany to American parents who returned back to the US when she was two years old. She started her career as a model before landing featured roles in television.

She has a German Shepherd/Malamute dog named Phantom.

In 2005, she was included in the list of “50 Sexiest Women” by the Femme Fatales magazine.

Allison has appeared in a number of TV series and shows including Wilfred, The Nightmare Room, Opposite Sex, Evening Shade, 7th Heaven, among others.

In 2007, she won the Teen Choice Award Best for Sidekick in a TV Series for Smallville.

She directed the first episode of the TV series Smallville in the fall of 2008.

She has her own production company called Parvati Creative Inc. which she founded with Rose Bhura and her former Smallville costar Kristin Kreuk.

She joined NXIVM in 2006 and has been involved in sex trafficking. She was arrested on April 20, 2018, and was sentenced to three years in federal prison, and was ordered to pay a fine of $20,000.