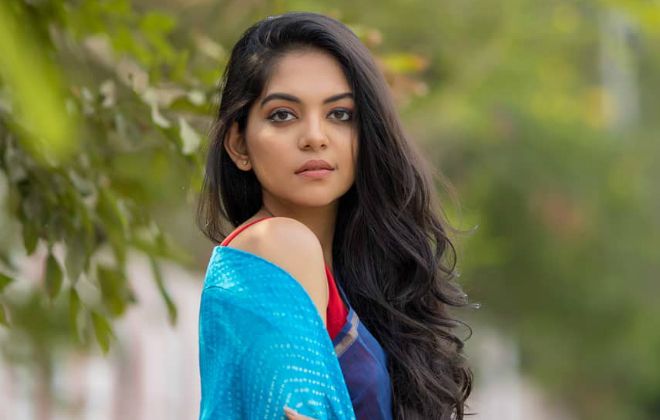 Who is Ahaana Krishna?

Ahaana Krishna is a young Indian actress who is best known for her work in Malayalam films. She gained critical acclaim for her starring role as Sarah Chacko in Nivin Pauly starring Njandukalude Nattil Oridavela. Her other notable work include her roles in Njan Steve Lopez and Luca/

Ahaana Krishna was born on the 13th of October 1995, in Trivandrum, Kerala, India. She is currently 24 years old.

Ahaana is the oldest of three daughters to actor Krishna Kumar and his wife Sindhu Kumar. Her two sisters are Diya and Ishaani. Her parents are of Malayali descent.

Ahaana Krishna attended Holy Angels’ ISC school in Trivandrum until high school before moving to Chennai for higher studies. She enrolled at M.O.P. Vaishnav College of the University of Madras from where she earned her degree in Visual Communication.

The gorgeous beauty is currently single. Ahaana Krishna has kept her private life private. Thus, there is not much information related to her personal life available at this time. Moreover, Ahaana is currently focusing on her career and has very little time for romance.

Ahaana Krishna made her on-screen debut in Rajeev Ravi’s 2014 Malayalam film, Njan Steve Lopez, playing the lead role of Anjali. Her performance in the film received appreciation from critics and the audience.

It is too early to estimate her net worth as the budding actress had only appeared in two films.

She has appeared in a few TV commercials like Vedika Sarees before making her mark in mainstream cinema.

In early 2017, a video of her her sisters shaking legs to Ed Sheeran’s “Shape Of You” went viral on the internet.

In addition to being a successful actress, she is also a dancer and singer. She is also known for her contribution to the music album, Whispers, and Whistles, in 2017.

She has also appeared in a music video for Jagan Shaji Kailas’s “Kari” under the music of Masala Coffee in 2016.

Ahaana Krishna can be next seen in the Malayalam film Pidikittapulli.