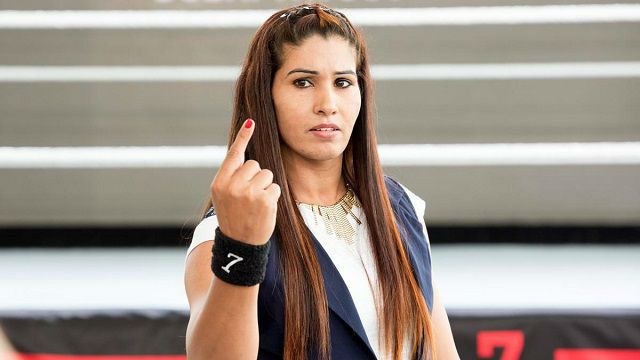 Kavita Dalal, better known as Kavita Devi, is a professional wrestler and a former weightlifter, who had represented India in several international competitions. Born in 1983, Kavita hails from a small village in Haryana, has been gifted with amazing talents, and had to go through several hardships to get to the celebrity status she has reached today.

Kavita Devi was born on the 20th of September 1986, in Malvi, Jind District, Haryana, India. She is currently 35 years old and the daughter of a former police officer. She has an older brother named Sandeep Dalal.

Kavita Devi attended Girls Senior Secondary School in her hometown and decided to move to Lucknow to pursue higher studies. She comes from a society where women hardly take higher studies. She broke the odds and with support from her elder brother, Kavita Dalal enrolled at La Martinière College, Lucknow, and graduated with a Bachelor of Arts (BA) degree.

Kavita Devi married Volleyball player Gaurav Tomar in 2009. Together, they have a son named Abhijeet, born in 2012.

After graduation, she joined the weight-lifting academy to become a professional weightlifter.

Around that time, she joined Sashastra Seema Bal (SSB), a border guarding force under the Government of India. She was posted as a constable and retired as a Sun-Inspector.

Kavita opted out of SSB in 2010 and returned to weightlifting to pursue her career.

She is also trained in Mixed Martial Arts (MMA).

In 2016, Kavita Devi joined the Continental Wrestling Entertainment (CEW) Academy, which is owned and managed by the former World Heavyweight Champion, The Great Khali.

He was instrumental in training her as a professional wrestler. She represents the academy under the name “Hard KD” and participated in several tournaments, including the WWE Mae Young Classic in 2017.

Kavita Devi was once challenged for an open match by a fellow CWE Superstar BB Bulbul (India’s first female professional wrestler) where she took her wearing the traditional Salwar Kameez.

In August 2017, a video of her went viral garnering more than 4 million YouTube views. Kavita Devi took on New Zealand’s Dakota Kai, wearing a Salwar-Kameez with dupatta tied across her waist, but she eventually lost the match.

Kavita Devi received an offer from the makers of Bigg Boss, the Indian version of Big Brother, but she apparently rejected the offer due to her dislike of the show’s format.