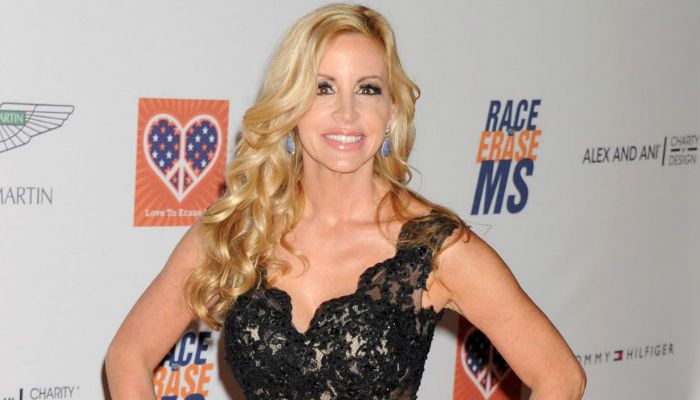 Who is Camille Grammer?

Camille was born Camille Donatacci in Newport Beach, California on September 2nd 1968. Camille grew up in a typical middle class family in New Jersey. Her father is a financial adviser, who still works in New York City. She attended Montclair State College in New Jersey where she studied English literature. With an inside crave for acting; she enrolled to UCLA School of Theater, Film and Television in Los Angeles after her graduation.

Grammer began her career in show business as a dancer in the early 1980’s and featured in Club MTV for several years. She gradually accomplished fame amongst audience which earned her roles in music videos. She had appeared in several music videos in the 90s and her appearance in the videos named ‘Give it All You Got’ from Chicago based metal group Rights of the Accused in 1991 and also danced in Manitoba’s Wild Kingdom’s ‘The Party Starts Now’ pushed her to achieve new heights.

In 2010, she began appearing on The Real Housewives of Beverly Hills. The series documented the family issues between her and Kelesy and the RHOBH episode on January 13, 2011, where she revealed that her husband wanted out of their marriage, was the highest rated cable show at the time and the episode garnered highest views in that season. In 2011 she had a guest-starring role on the season finale of the CBS sitcom $#*! My Dad Says, playing a recently divorced reality star named Camille.

Camille took a few other roles while filming the second series of Real Housewives, she co-hosted the CNN Showbiz Tonight special at the Acadamy Awards and persented the 2011 NHL Awards in Las Vegas, and she announced in 2012 that she will not return to Real Housewives for the third season.  In 1996 Grammer was diagnosed with Irritable Bowel Syndrome, and she has been featured in a Public Service Announcement to raise public awareness of this disorder. In 2013 she was diagnosed with endometrial cancer, which required serious surgery, and she was heartbroken that Kelsey didn’t even get in touch with her to offer support.

Fans have been speculating of her possible return to the all time popular Real Housewives of Beverly Hills which had seen seven season, is still a popular show out there. But, no one knows whether she will return to the show or will make any possible guest appearance in the show. And, of course, it’s her call to make it.

Camille met Kelsey Grammer in 1996 when she had to do a guest appearance in an episode of the hugely-popular sitcom ‘Frasier’. They started to love each other and they eventually married in 1997.

Their marriage grabbed huge media attention and she often made it to the headline since then. After her marriage, she started a new production company called Grammnet Productions with her husband and has since produced many successful shows, including ‘The Game’, ‘Girlfriends’ and ‘Medium’. It was around this time she started to write and create shows and also produced some shows for their production company.

They together have two children, both born via a surrogate mother, a daughter named Mason and a son nsmaed Jude. Camille filed for a divorce in July 2010 and she asked for primary physical custody of her daughter and son, in addition to child and spousal support. Kelsey and Camille Grammer’s divorce was finalized in February 2011.